The NMEA 2000 standard was defined by, and is controlled by, the US-based [[National Marine Electronics Association]] (NMEA). Although the NMEA divulges some information regarding the standard, it claims copyright over the standard and thus its full contents are not publicly available. For example, the NMEA publicizes which messages exist and which fields they contain, but they do not disclose how to interpret the values contained in those fields. However, enthusiasts are slowly making progress in discovering these PGN definitions

NMEA 2000, abbreviated to NMEA2k or N2K and standardised as IEC 61162-3, is a plug-and-play communications standard used for connecting marine sensors and display units within ships and boats. Communication runs at 250 kilobits-per-second and allows any sensor to talk to any display unit or other device compatible with NMEA 2000 protocols. Electrically, NMEA 2000 is compatible with the Controller Area Network (“CAN Bus”) used on road vehicles and fuel engines. The higher-level protocol format is based on SAE J1939, with specific messages for the marine environment. Raymarine SeaTalk 2, Raymarine SeaTalkNG, Simrad Simnet, and Furuno CAN are rebranded implementations of NMEA 2000, though may use physical connectors different from the standardised DeviceNet Micro-C M12 5-pin screw connector, all of which are electrically compatible and can be directly connected.

The protocol is used to create a network of electronic devices—chiefly marine instruments—on a boat. Various instruments that meet the NMEA 2000 standard are connected to one central cable, known as a backbone. The backbone powers each instrument and relays data among all of the instruments on the network. This allows one display unit to show many different types of information. It also allows the instruments to work together, since they share data. NMEA 2000 is meant to be “plug and play” to allow devices made by different manufacturers to communicate with each other.

Examples of marine electronic devices to include in a network are GPS receivers, auto pilots, wind instruments, depth sounders, navigation instruments, engine instruments, and nautical chart plotters. The interconnectivity among instruments in the network allows, for example, the GPS receiver to correct the course that the autopilot is steering.

NMEA 2000 connects devices using Controller Area Network (CAN) technology originally developed for the auto industry. NMEA 2000 is based on the SAE J1939 high-level protocol, but defines its own messages. NMEA 2000 devices and J1939 devices can be made to co-exist on the same physical network.

NMEA 2000 (IEC 61162-3) can be considered a successor to the NMEA 0183 (IEC 61162-1) serial data bus standard. It has a significantly higher data rate (250k bits/second vs. 4800 bits/second for NMEA 0183). It uses a compact binary message format as opposed to the ASCII serial communications protocol used by NMEA 0183. Another improvement is that NMEA 2000 supports a disciplined multiple-talker, multiple-listener data network whereas NMEA 0183 requires a single-talker, multiple-listener (simplex) serial communications protocol.

The only cabling standard approved by the NMEA for use with NMEA 2000 networks is the DeviceNet cabling standard, which is controlled by the Open DeviceNet Vendors Association. Such cabling systems are permitted to be labeled “NMEA 2000 Approved”. The DeviceNet standard defines levels of shielding, conductor size, weather resistance, and flexibility which are not necessarily met by other cabling solutions marketed as “NMEA 2000” compatible.

Mini cable is primarily used as a “backbone” (or “trunk”) for networks on larger vessels (typically with lengths of 20 m and above), with Micro cable used for connections between the network backbone and the individual components. Networks on smaller vessels often are constructed entirely of Micro cable and connectors.

An NMEA 2000 network is not electrically compatible with an NMEA 0183 network, and so an interface device is required to send messages between devices on the different types of network. An adapter is also required if NMEA 2000 messages are to be received by or transmitted from a PC. 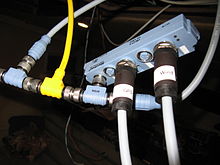